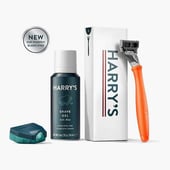 Harry's is an American company that

Founded as a subscription-based shaving company in 2012 by former Bain & Company consultant Andy Katz-Mayfield and Warby Parker co-founder Jeff Raider, Harry’s has quickly become one of the top purveyors of men’s shaving supplies sold both online and offline. It has grown and captured so much of the market, the corporate parent of shaver rival Schick tried to buy the company for $1.37 billion in 2020 but was blocked on anticompetitive grounds.

This consistent growth has expanded Harry’s at a rapid clip. First the company sold men’s razors direct to consumers that they purchased from an independent manufacturer, then in 2014 they vertically integrated and purchased a factory in Eisfeld, Germany to begin manufacturing its own blades. In 2016, Harry’s entered into retail by launching at Target, followed by Walmart in 2018. Next came an expansion into personal care products for men, and hair removal products for women under a second brand, Flamingo. A high-end cat products company incubated by the company’s innovation lab led to a third brand in 2020, Cat Person, and a fourth brand that focuses on haircare products for women debuted in early 2021, Headquarters. Additional brands are in the works.

From an information technology perspective, that means planning so the right technical capabilities are in place. But it goes beyond that, says Christopher Beck, global head of IT at Harry’s. “It's also about the business processes that are enabled by the technology,” he says. “Are your business processes optimized to be able to support where the company is going?”

For Harry’s, the IT systems journey that has enabled it to keep growing has encompassed four distinct phases over the course of its short life.

The first software that most businesses purchase is a basic accounting solution for financial management. Harry’s was no exception.

“I think it was QuickBooks, but in any case it was very basic accounting software,” says Beck, who joined the company later during the second phase of its IT journey.

Almost immediately after launch, Harry’s purchased a German manufacturer so it could vertically integrate and make its own razors. It also began looking for backend software that was more robust, something that would lay the foundation for the next few years of growth.

For both those needs, Harry’s required an enterprise resource planning system (ERP) that would serve as the source of truth for the business.

Harry’s still was small at the time, though, with only a few bodies serving as help desk support. So the company chose SAP Business ByDesign, a scalable, cloud-based solution that could power the business on a pro level but wouldn’t require a large investment in capital or manpower to set-up and maintain. SAP Business ByDesign also could easily integrate with third-party solutions, something Harry’s wanted so it could keep using favored third-party solutions in areas such as distribution.

“I think as a small business grows, you're going to run into the need to put processes in place in order to be a little bit more efficient with how you do business. So that's where SAP Business ByDesign was certainly helpful,” says Beck.

“It took a wild west approach, which is just get it done as fast as you can, but wrapped a little process around it to standardize. That helped us get into the mindset of standardizing our processes”.

SAP Business ByDesign also helped later when the business made the next jump, he says, because Harry’s already had familiarity with ERP and what it could do.

“If you implement correctly,” he notes, “an ERP can free up your time from manual tasks so you can perform more value-added work”.

When Beck joined Harry’s in 2018, there was a feeling within the company that its backend systems may not ultimately be able to keep pacewith the company’s growth.

“We didn't have an IT team at the time of implementation, so the finance team really implemented the solution with an implementation partner,” Beck explains. “As we kept growing, we began looking at other functionality that normally would be within an ERP—and there were issues.”

Specifically, the supply chain team wanted improved distribution and logistics, and the planning team needed materials resource planning (MRP). All they had were very basic tools at the time, though.

“We told SAP that we needed somebody good or we're done with the product,” he says. “So they gave us Navigator.”

Navigator Business Solutions is an SAP implementation Gold Partner that specializes in SAP Business ByDesign, and it has implemented more than 500 ERP systems over the past 20 years. Together, Navigator and Harry’s began methodically addressing the issues that the
company faced.

“Navigator was very knowledgeable coming in,” says Beck. “Not just the products, but the business side of it. They seemed to just understand. So when there were additional things that we were trying to do, they had business process expertise to help make it happen.”

Where Harry’s did run against limitations in the system, Navigator helped develop workarounds.

One of those workarounds was how to allow the purchase of multiple brands on the same purchase order. Having seen this problem at other businesses, Navigator helped Harry’s split the order with its proprietary iConnect middleware so it flowed into the ERP system as two
separate orders, then recombined them again at the end for the invoice.

Another example was the issue of harmonizing third-party logistics (3PL) with Harry’s internal systems. Some 3PL systems needed to order in “eaches”, while Harry’s worked in cases. Again, a translation through the iConnect middleware negotiated the difference so both the 3PL and the electronic data interchange connection to Harry’s system got what they needed without manual intervention.

“Although we have found some limitations within the product itself, Navigator as a partner has been very supportive,” notes Beck. “They always come up with a practical solution.”

In the middle of 2020, while many other firms were wondering if they even would stay in business because of the Covid-19 coronavirus pandemic, Harry’s decided its growth now demanded an ERP system like those used at the largest companies. It was time for SAP’s flagship offering, S/4 HANA.

“Operating in multiple geographies with multiple brands at this point, it's just gotten difficult to continue with what we have,” explains Beck. “SAP Business ByDesign is good now but we’re soon going to outgrow it.”

In particular, Harry’s sees a day in the near future when a plethora of brands, SKUs and geographies will require the visibility and operational complexity that only S/4 HANA can provide.

Instead of waiting until that day has arrived, potentially throttling business growth, Harry’s is again building the foundation for its growth several years ahead so there is no disruption when the time comes.

“We’re taking this opportunity now to get ahead and be on our future platform sooner so we don’t go through those growing pains,” he says.

Coming from one of SAP’s small business offerings is expected to help minimize growth pains as well.

“One of the great things about ByDesign is that it is very similar to S4 from an interface perspective,” he says. “We're still going to have to train employees on some of the capabilities of the new system. But the look and feel is going to be very familiar to them, which certainly is a huge selling point.”

Migrating from one cloud-based system to another will be an advantage, too, unlike businesses that began with an on-premise system and now face the task of moving everything to the cloud. This is part of why Harry’s chose a cloud-based solution from the beginning.

“Being on a web-based system already is certainly helpful for us,” he notes. “We have SAP Business ByDesign in the cloud, and we're going to move to S4/ HANA in the cloud. It just makes things a bit easier.”

Ultimately, growth like Harry’s takes thoughtful planning, according to Beck. Plan ahead by several years, he says, since operational capabilities today become blockers tomorrow if the right foundation is not set in advance.

“Can your systems support where you want the business to be in two or three years?” he asks. “It is always challenging to plan ahead as a startup. But try to aim for that as opposed to playing catch-up after the fact.”

For 6 years of its eight years in existence as a company, this recipe has served Harry’s exceptionally well.

Journey of a Unicorn

How Harry's, Inc. has grown its backend systems and become a shaving products unicorn with the help of SAP Business ByDesign and now S/4 HANA.

Anatomy of a Scaling Startup:

Harry's has a growth rate that most companies would envy, and a valuation that makes it a New York-based unicorn. For a consumer-packaged goods firm, that's a nice trick.